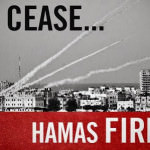 The Israeli government says that Hamas broke the truce agreement by firing rockets before the ceasefire window expired at midnight Eastern Standard Time:

Israel agreed to Egypt’s call to extend the 72-hour ceasefire. Shortly after 4 a.m., with the ceasefire still in effect, rockets were fired at Israel from Gaza by terrorists, followed by dozens of more rockets that were fired from Gaza, causing injuries and damage in Israel.

It adds that two rockets were fired during the window:

This prompts the Israeli response:

After hours of renewed rocket fire from Gaza, PM Netanyahu and DM Yaalon ordered the IDF to respond with force…Israel will continue defending itself against Hamas’ terror.