‘My brother died to stop terror’ 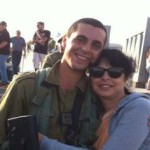 The sister of South Padre Island, Tx., native and Israel Defense Forces lone soldier Nissin Sean Carmeli says he died in order to stop terror as well as anti-Semitism and other forms of intolerance, while the international focus on Israel is ‘hypocritical’ when there are many genocides and conflicts worldwide:

The only thing that has been on my mind for the past two weeks is why my brother really died. It seems a little hypocritical. Aborigines in Australia, Indians in America, Armenians in Turkey, Tutsis in Rwanda, Iraqis by ISIS, Syrians by their own kind, Russia, Europe, Africa, and the list goes on. But the media emphasizes the Israeli-Palestinian conflict. The political focus is on the Jews, the Jews, yes, the Jews. Perhaps this is all I see.

She says that terrorism begins in Israel, but…

…like the Islamic State recently said, ‘The Islamic caliphate has been established, God willing it will not stop until we raise the flag of Prophet Muhammad in the White House.’ My brother fought terrorism, not only for my family and me, but for all of you as well, with the hope that someday, Jews, Christians, Muslims and all religious and seculars people will find serenity in their homes, in their hearts, and in their minds.