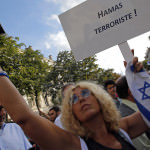 Hundreds of riot police deploy near the Israeli embassy as several thousand demonstrators turn out in Paris for France’s first pro-Israel rally of the 2014 Gaza conflict. Among signs carried by protestors:

The protest comes amid reports that France may ban the Jewish Defence League, or LDJ, blamed for provoking violence at pro-Palestinian rallies.