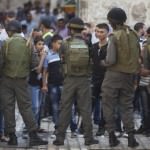 At least a dozen protestors are arrested and five police injured as firecrackers, rocks and Molotov cocktails are thrown by protestors in two days of rioting at the Temple Mount in the Old City of Jerusalem, in connection with the fast day of Tisha B’Av, the ninth day of the month of Av on the Jewish calendar when it is customary to mourn the destruction of the first and second Jewish temples. The Temple Mount is open to visitors after security forces push the protestors back into the Al Aqsa mosque and implement extra security measures.