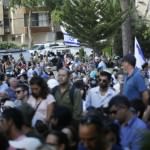 Thousands attend the funeral of 23-year-old IDF Second Lt. Hadar Goldin at the military section of the Kfar Sava cemetery, with only those on a list created by the family admitted to the cemetery and the rest of the crowd gathering outside the gates. The fiancee, mother and twin brother of the Givati Brigade reconnaissance soldier, initially believed kidnapped by Hamas and later confirmed dead, express their regrets along with two family rabbis while his father urges the crowd to ‘live righteously.’ Simha Goldin:

You who came en masse, live righteously and don’t hate one another. Hadar wanted to be a Jewish fighter. Do the same as he did. Take the bible with you and become Jewish fighters. I thank the crowds who came from far and wide to be with my family.