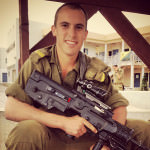 Stuart Steinberg confirms that his 24-year-old son Max is killed fighting for the Israel Defence Forces. Steinberg, whose family lives in Southern California’s San Fernando Valley, was a sharpshooter for the Golani Brigade. According to the Jewish Federation of Greater Los Angeles, Max first visited Israel in June 2012 together with his younger brother and sister, via the ‘Birthright’ program which aims to attract young Jewish adults from abroad to travel to the country. He attended Pierce College and El Camino Real High School in Southern California. After visiting Israel, he decided to return and join the IDF in December 2012, and was living in Beersheba.

Separately, the IDF says in a statement that 21-year-old Sgt. Nissim Sean Carmeli has been killed in combat in the Gaza Strip. Deputy Consul General Maya Kadosh says Carmeli was from South Padre Island, Texas.