Jack White performs Alone In My Home from the album Live Under the Lights of the Rising Sun on The Ellen Show.

Jack White performs Would You Fight For My Love from the album Live Under the Lights of the Rising Sun on The Ellen Show.

White and Ellen discuss the type of father he is on The Ellen Show.

You can’t have a video game in the house, but you can have something mechanical.

White releases the music video for Would You Fight for My Love? The video is directed by Robert Hales and features White as a stylish bar hound, with a moody blue color scheme.

Two tracks–Buzzkill(er) and It’s Just Too Bad–and are announced as an upcoming single in White’s Third Man Records Vault series. The songs are part of Vault Package #21, which also includes The White Stripes’ Live Under the Lights of the Rising Sun LP.

White performs a secret “medical-themed” London show in association with the Punchdrunk theatre company, in which attendees are asked to wear surgical masks and sign away their rights and organs. The attendees then enter different treatment rooms and record their responses to different songs. White performs a short set to conclude the show, ending with his collapse after the performance of Icky Thump. The musician is strapped to an emergency bed and wheeled away.

A photo posted by Third Man Records (@thirdmanrecordsofficial) on Jul 7, 2014 at 9:34am PDT

White performs Temporary Ground on Conan. Joined by an upright bassist, dobro player and fiddle player he renders a stripped down version of the song, which is part of the album Lazaretto. 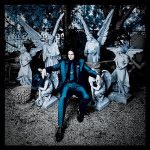 White releases his second album on the Third Man Records label (distributed through Columbia Records). The album sells 138,000 copies in its first week to claim the No. 1 spot on the Billboard 200. The vinyl release also sets the record for largest sales week for a vinyl album since tracking began in 1991. The album features members of both White’s backing bands (the all-male Buzzards and all-female Peacocks), with initial sessions recorded during touring for his solo debut. Some of the song lyrics are inspired by short stories and plays White wrote at 19 and rediscovered in his attic.

…What if I talk to my younger self and work together with him? What if you write songs with your younger self’s ideas? It wasn’t, ‘Let me take this page and set it straight to music.’ That would be too easy. But rather, what if I pull from here and take it somewhere totally new, so I’m actually collaborating with myself from the past on a song.

White is a Grammy nominee for Best Music Video for I’m Shakin’.

White is a Grammy nominee for Best Rock Performance for I’m Shakin’.

White is involved in a barfight with Stollsteimer at the Magic Stick club in Detroit. Stollsteimer receives a bloody nose and bruises to his right eye, while White receives cuts on his left hand. The altercation takes place during a record release party for Blanche. A spokesman for the Von Bondies says:

White approached Stollsteimer during the concert, physically forcing him against the speakers, and began shouting. Stollsteimer attempted to turn his head [to] face White but refused to engage in conversation. Visibly angered by Stollsteimer’s unwillingness to argue or fight, White spat into Stollsteimer’s face and punched him in the head and face repeatedly. White then forced Stollsteimer to the ground and continued his attack until White was restrained by several crowd members.

White claims he fought back in self-defense.

TMZ leaks White’s private emails after wife Elson submits them in the couple’s divorce proceedings. The emails include comments made about Auerbach of the Black Keys, whose children are attending the same school as White’s:

That’s a possible twelve f***ing years I’m going to have to be sitting in kids chairs next to that a**hole with other people trying to lump us in together. [Auerbach] gets yet another free reign to follow me around and copy me and push himself into my world.

With its national plan, the Library of Congress has laid the groundwork for the long-term preservation of our audio history but the challenges to achieving this at a significant scale are daunting. I hope that Mr. White’s extraordinarily generous donation inspires many others, especially those in the recording business — record companies, artists, songwriters, and others — to follow his lead to help ensure that we are able to preserve and make accessible recent and historical recordings at risk of loss.

Guinness says the White Stripes were acknowledged as record-holders for shortest concert in the 2009 edition, but have since scrapped the category.

Subsequent to this appearance we received a large volume of applications from bands and performers seeking to beat this record. The ultimate results of this was individuals claiming that simply appearing onstage was enough to qualify them for this record.

The organization also encourages White to “attempt any of the 40,000 records that are currently active on our database.”

White claims the Guinness Book of World Records denied The White Stripes’ record for shortest concert in history for its 2007 show.

The thing is, though, that the Guinness book is a very elitist organisation. There’s nothing scientific about what they do. They just have an office full of people who decide what a record is and what isn’t. Most of the records in there – who has the biggest collection of salt-and-pepper shakers or whatever – are just whatever they want them to be.

Accompanying the balloons were custom postcards with instructions for the finders to submit photos, discovery location and the date on which the record was found. All of which will be incorporated into a website where fans can access the information.

Jackson and White perform Shakin’ All Over during The Late Show with David Letterman to promote their album The Party Ain’t Over.

White debuts his new band in a private show at the opening of Third Man Records’ downtown offices. White plays drums with Mosshart singing, Lawrence on bass, and Fertita on guitar. The band’s beginnings can be traced back to the Kills/Raconteurs tour where White asked Mosshart to fill in on lead vocals.

It reenergized the tour…We had one day off in Nashville where [Mosshart] had spent the night and the next day she would fly out. So the three of us [White, Mosshart and Lawrence] said, ‘Why don’t we record a 7-inch?’…Dean just happened to be spending the night in one of the ante rooms [in my house].

White and Lynn wins the Grammy for Best Country Collaboration With Vocals for Portland Oregon, and Best Country Album for Van Lear Rose.

In a special issue of Rolling Stone dedicated to the 100 most influential rock guitarists, Fricke names White at 17:

White has become the hottest new thing on six strings by celebrating the oldest tricks in the book: distortion, feedback, plantation blues, the 1960s-Michigan riff terrorism of the Stooges and the MC5. Onstage, decked out like a peppermint dandy, he violates classic covers (Dolly Parton’s “Jolene,” Bob Dylan’s “Isis”) with fireball chords and primal, bent-string scream. 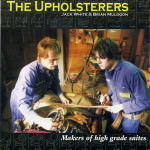 White forms a band with Muldoon called the Upholsterers. The group releases a solitary single, Makers of High Grade Suites. White hides 100 of the clear plastic 7″ vinyls in furniture:

We made 100 copies of a 7″ on clear vinyl with transparency sleeve so you couldn’t even see it if you x-rayed it. We left those in a hundred pieces of furniture that he upholstered that year… to one day be found, or maybe never be found.

In late 1990, White begins working as an upholsterer’s apprentice for family friend Brian Muldoon. Muldoon introduces him to punk rock. White writes secret messages on the insides of the furniture to communicate with other upholsterers.

I used to believe that upholsterers should leave messages for each other because we’re the only ones that see the inside of furniture. I was always shocked. I worked at a shop with five other guys and I said ‘why don’t we write messages to each other?’

The film follows a priest as he tracks down a serial killer targeting clergy. The movie is co-written by Elmore Leonard, stars Sutherland, and is filmed in Detroit. White appears in the film as an altar boy.