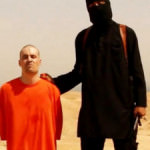 Foley is beheaded by ISIS in a video posted online and titled A Message to America. Foley addresses the camera before his death, leaving a message for his brother, John, who serves in the US Air Force:

I died that day, John, when your colleagues dropped that bomb on these people. They signed my death certificate.

Foley recites a long list of anti-American statements, and ends his speech with:

I wish I had more time, I wish I could have the hope of freedom and see my family once again, but that ship has sailed. I guess all in all, I wish I wasn’t American.

There is a member of the Islami State shown standing over Foley:

Any attempt by you, Obama, to deny Muslims liberty & safety under the Islamic caliphate, will result in the bloodshed of your people.

Foley is then beheaded, and his head is placed on top of his body.