The site is profiled on CBS’ 60 Minutes, in a segment called Wikimania, hosted by Safer. Safer asks about the origins of the site, the who the readers are:

Wales, on running the site as a charity:

It just felt right that we should be a charity, free knowledge for everyone. So that’s always been our philosophy…If we were ad supported, we would always be thinking about, well, gee, look at all these people reading about Elizabethan poetry. There’s nothing to sell them. Let’s try to get them to read about hotels in Las Vegas, or something like this. And we don’t. We just don’t care. 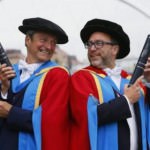 Wales receives an Honorary Degree of Doctor of Letters from Glasgow Caledonian University at a ceremony in the Clyde Auditorium. He receives the degree from GCU Chancellor Professor Muhammad Yunus. Other graduates included  Gavin Esler and Khalid Abdulrahim, founder and chairman of the KAR Group. GCU Principal and Vice-Chancellor Professor Pamela Gillies:

The university is privileged to welcome such distinguished Honorary Graduates into our ­extended academic community. Each Honorary Graduate brings a wealth of professional experience coupled with a strong commitment to serve the common good in public life.