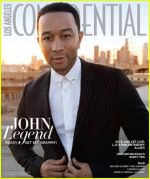 Legend appears on the cover of the December 2014 issue of Los Angeles Confidential magazine. He talks about whether he loved his wife from the  moment they met, who inspired his song All of Me, and his childhood.

I was a very precocious kid, so I was very thirsty for learning. I wanted to learn the piano. I wanted to study the encyclopedia. I wanted to do everything. I just wanted to soak up a lot of knowledge. 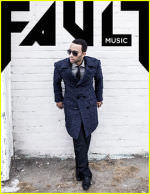 Legend appears on the cover of the February 2013 issue of Fault magazine. He talks about his advice to younger performers, his musical influence, and his plans for 2013.

Well, when I was younger, lots of soul music: Motown and artists like Marvin Gaye, Al Green, Nat King Cole [and] Luther Vandross. Then, when I was a bit older (in my early teens), artists and groups like Jodeci had a big influence on me.