What's this? This is an unbiased just-the-facts news summary about John McAfee, extracted from the original article by Newslines' contributors. To see the newsline of each topic, click the links below. Learn more 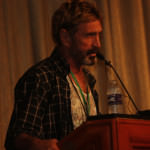 McAfee announces he has started Brownlist.com to take complaints filed by ordinary people about a perceived injustice such as repression from a government or callous act of a large corporation, and find justice via crowdsourcing suggestions from readers. The site also gives the entity that is the subject of the complaint 24 hours to respond before posting the complaint. During a surprise speech at DefCon:

Turn your anger into something positive

People are already complaining online in high numbers, but with BrownList, subscribers have a way to effectively deal with complaints and boost their reputations.

He says he is raising money by donations to fund the company as he left his money in banks in Belize, his former domicile. BrownList is free for users posting and responding to complaints but requires a subscription fee before entities can respond to complaints about themselves. FAQ section:

Subscriptions are set to be cost-effective and affordable for different types of entities, including non-profit and charitable institutions, as part of BrownList’s mission to help the world become more transparent, fair, proactive, and solution-oriented.