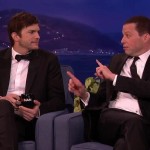 In an interview on Conan, Cryer describes how, when working on an episode of Two and a Half Men, they had to figure out how to show Kutcher naked:

We we’re working this over in the writer’s room, and then Ashton pipes in ‘oh, well I’ve got a huge prosthetic penis in my trailer’. We all had that awkward moment of ‘of course you do’.

You too can have one made. I had these web shorts that I did for my company and we were producing these various web shorts, like hidden camera things. One of the things that we did was this sketch called ‘Naked Man.’ We had this guy and we had him put on this prosthetic unit, and we sent him to interesting places… I was like, ‘Who knows when you’re gonna need a prosthetic penis?’ So, I kept it and I just happened to have it around.

Cryer accepts Charlie Sheen’s Ice Bucket Challenge to bring awareness about the ALS disease and to raise money for ALS research.  He dumps both cash and ice water on himself.

He nominates Andy Richter and Bryan Cranston to do the challenge.

Cryer wins the Emmy Award for Lead Actor in a Comedy at the 64th Annual Emmy Awards for portraying Alan Harper in Two and a Half Men.

I’m as shocked as you people, that’s all I’m going to say. That’s why my speech sucked!

Cryer is nominated for Outstanding Lead Actor in a Comedy at the 64th Primetime Emmy Awards for portraying Alan Harper on Two and a Half Men.

I was actually awake this morning when they announced the Emmy nominations thanks to my newfound need to pee several times a night. Finally, my enlarged prostate pays off!!

Cryer is honored with a star on the Hollywood Walk of Fame under the category of Television. There to celebrate his induction are his Two and a Half Men co-stars: Ashton Kutcher and Angus T. Jones.

I do have to say a real word of thanks to my costar of eight years, Charlie Sheen, who gave me so much as a performer and who I enjoyed working with so much.

Cryer is nominated for Outstanding Supporting Actor in a Comedy at the 63rd Primetime Emmy Awards for portraying Alan Harper on Two and a Half Men.

In a year when nothing much has happened on our show and you could barely find a word about me or my co-stars on the Internet, it is lovely to be recognized by the Academy in this way!

Cryer is nominated for Outstanding Supporting Actor in a Comedy at the 62nd Primetime Emmy Awards for portraying Dr. Alan Harper on Two and a Half Men.

An open letter to Neil Patrick Harris: Hello Neil Patrick Harris, It’s me, Jon Cryer, your worst nightmare.
Yes, that’s right Neil Patrick Harris, the Television Academy has, once again, seen fit to nominate us both in their ‘Outstanding Supporting Actor in a Comedy Series’ category. Once again we will be joined in a battle of thespianism. Will it be like last year, when you wowed the crowd with your singing and dancing, entertained them and made them laugh, showed them that, clearly, you possess more talent in your tiny little pinky than the whole body of that stupid Jon Cryer guy, only to be brutally disappointed when our category was announced? We’ll see, Neil Patrick Harris, we’ll see. My lack of talent has taken me this far and I’m betting it won’t let me down again this year. Thankfully, the other gentlemen in this category are also supremely gifted. I’m a shoo-in!

Cryer is nominated for Outstanding Supporting Actor in a Comedy at the 61st Primetime Emmy Awards for portraying Dr. Alan Harper on Two and a Half Men.

It’s great to have some new people in the category, because it’s some new people I can lose to. This year, I’ve decided that if I lose I’m just going to lose it completely and beat the crud out of somebody sitting near me. … I think people will watch the Emmy telecast just to see who in the heck I beat up.

What's this? This is an unbiased just-the-facts news timeline ('newsline') about Jon Cryer, created by Newslines contributors. Make it grow it by finding and summarising news. Learn more