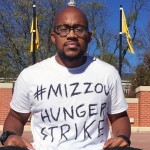 Butler goes on hunger strike as a response to the lack of action from UM System President Wolfe to several instances of racism and discrimination in past months. He says he will end the strike when Wolfe is no longer in office, or when his internal organs fail. He cites MSA President Payton Head being called a racial slur on campus, the removal of Planned Parenthood services, the #ConcernedStudent1950 protest and the drawing a swastika in feces in a bathroom in Gateway Hall.

Let it be known I have no ill will or thoughts of harm toward Mr. Wolfe. But I do have an urgency to make the campus I call home a more safe, welcoming and inclusive environment for all identities and backgrounds. Although these incidents individually are not (Wolfe’s) fault as a collection of incidents at the university, they are his responsibility to address…In each of these scenarios, Mr. Wolfe had ample opportunity to create policies and reform that could shift the culture of Mizzou…Being sound of mind and heart, I have committed myself fully to this endeavor because I believe that the University of Missouri System and all of its constituents deserve a leader who is competent enough to perform at all levels of the position including administrative, political, financial and emotional.