The FA is awaiting referee Clattenburg’s report before deciding on any further steps to take regarding Mourinho’s conduct in Manchester United’s 0-0 draw against Burnley. Mourinho had been incensed by the failure to award Matteo Darmian a penalty after he had fallen in the box following a touch from Jon Flanagan.

As the victorious Arsenal squad come back down the Wembley steps after collecting their medals for their victory over Chelsea in the Community Shield, Mourinho starts congratulating them one by one. But Wenger, rather than shake the Chelsea manager’s hand, changes his path to avoid him, leaving a snubbed Mourinho to head down the tunnel on his own. Mourinho:

You only miss me if you want to miss me and every Arsenal player came in my direction, which was the easiest thing to do because I was just there. If other people didn’t come in my direction, that is not a problem, not a story and not the end of the world. I did my job, the job that my club deserves me to do and the status as a manager when I lose any trophy.

I shook a few hands today after the game, but nothing special there. I believe we live in a job where you have to respect people and respect everybody. It’s a difficult job. I think it’s vital, I have said many times, in managers’ meetings that managers respect each other.

Everton take on Chelsea at Goodison Park with an early kick-off time of 12:30 pm. The Blues already have two wins from their first two games. Everton have 49 wins over Chelsea while Chelsea have 54, both teams have drawn 47 times. Diego Costa is doubtful for the game after missing two days training. Jonathan Moss is referee. Mourinho:

We are trying everything for him to play tomorrow. He didn’t train for the last two days. 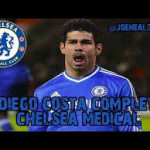 What's this? This is an unbiased just-the-facts news timeline ('newsline') about Jose Mourinho, created by Newslines' contributors. Help us grow it by finding and summarising news. Learn more