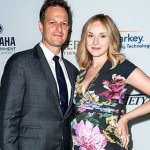 Flack and Charles are expecting their first child together this winter. The couple have decided to keep the sex of the baby a secret.

Your humor, like hot jazz, was topped by your sensitivity, compassion & kindness. Standing on my desk for you, always. #RIPRobinWilliams

Charles is nominated for Outstanding Supporting Actor in a Drama at the 66th Primetime Emmy Awards for portraying Will Gardner in The Good Wife.

I’m so proud of the show and humbled by this nomination. I’m thrilled for Julianna, Christine, Dylan, and our casting director Mark Saks for all of their respective nominations as well. It’s an honor to be mentioned with such a great group of talented actors.

Charles is nominated for Outstanding Supporting Actor in a Drama at the 63rd Primetime Emmy Awards for portraying Will Gardner on The Good Wife.

It feels really flattering. I’m touched by it. I can’t decide if the actual process of being nominated means as much to me as today or the outpouring of emails and texts from my fellow actor friends who have reached out and sent their regards. I’m feeling good.

What's this? This is an unbiased just-the-facts news timeline ('newsline') about Josh Charles, created by Newslines contributors. Make it grow it by finding and summarising news. Learn more