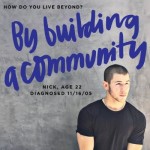 Nearly ten years ago my life changed dramatically when I was diagnosed with Type 1 diabetes. Since then, I learned how to manage and live well with this disease and made it my mission to speak openly about it with the hope of helping others deal with the struggles of managing diabetes in their own life. When I share my personal story, the questions I most often hear are, ‘What did you eat that gave you diabetes?’ or ‘Does that mean you were lazy as a kid?’ Although it’s been difficult to deal with the misinformation out there, I always found a way to not let the lack of knowledge surrounding diabetes affect me.  I can’t do that any longer, and that is why I’m excited to join Juliet, Sarah and Sam in BEYOND TYPE 1…With BEYOND TYPE 1, we will create a community for diabetics where they can share real-life stories about how they are living beyond Type 1 diabetes, and how they have shown that living with the disease has not slowed them down.

In an article for Fortune, De Baubigny talks about the personal impact of becoming a board member of Bono and Bobby Shriver’s Product RED initiative:

Joining a board also shaped me as a professional in more ways than I could imagine. It tested first-hand everything that I was advising our entrepreneurs to do as they built their companies: achieve the impossible on a limited budget, hire the best (one of the best hires I have ever made was bringing in Deborah Dugan to run RED), navigate choppy regulatory waters, reshape the business model against a changing economy, and develop long-term partners. At the same time, I had the privilege of watching a team and board come together to do something truly impactful: get medicine to those who need it and, ultimately, save lives. This “night job” taught me passion, tested my skills, and pushed me to grow–all skills from which KPCB was able to benefit tremendously. Joining a board (profit or not for profit) develops all the skills above, plus time management in order not to detract from your day job. It has been an incredible learning experience and has truly inspired me.

At Pao’s discrimination case, De Baubigny testifies that she has she has never been discriminated against at the firm, nor in her 14 years of venture experience, and that Pao is somewhat of an unpleasant complainer. She says Pao never talked to her about gender discrimination or retaliation. Describing her relationship with Pao as “mixed” she says of the company:

We feel very strongly that we have an opportunity and a responsibility on this issue [of women in tech] to do something about it. We very much want to ensure that more women build great careers

I had helped recruit Ellen to the firm. I really saw her as a person who could take her talents and apply them well. But consistently from the beginning her interpersonal relationships were troubled with many partners at the firm.

She says Pao’s quiet personality made it difficult to tell whether she had good ideas.

Ellen is an introvert. She was very quiet in meetings, so it was hard to really understand her points of view, whether she had original ideas and perspectives because she wasn’t forthcoming. And then on a one-on-one basis she could be very tough and very critical. In a small partnership it’s really important to build camaraderie, and that was difficult with Ellen.

She also rejected Pao’s testimony that she had called Ajit Nazre a sex addict.

That is completely ridiculous

Toward the end of Baubigny’s testimony, Kleiner lawyer Lynne Hermle asked her what she had meant by being “mortified” by an email Randy Komisar had posted around the firm:

I had written a blog piece for a website called Goop, about a day in the life of a working mama, and he published it around the firm and teased me about it. The website was started by the actress Gwyneth Paltrow — he was just teasing me — about things like having my hair done, all the things working women do

In an article in Forbes, de Baubigny discusses the challenges faced by working women, especially those who would like to maintain a career while starting a  family. She notes the “Scissor effect:” a graph where the percentage of male tech workers at a particular job level increases, while the percentage of female workers falls. She offers advice, and urges women to break past the gap:

I tell the young women in my life, for example, that if you are thinking through the questions about income, day-care costs and whether you can be a mother and a career star, just try to make it work for a couple of months. You’ve come this far. And we need you. Chances are you’ll be able to be both a great mom and a great career woman. The rewards are immense, and not just in terms of professional success.

De Baubigny is highlighted as one of Silicon Valley’s most stylish executives:

The mother of two is often seen in structured shift dresses, belted frocks, and flowing asymmetrical gowns, many of which she’s likely bought online at her favorite online shopping sites, Net-A-Porter and Kirna Zabete. Some of her choice designers include Derek Lam, J. Mendel, Azzedine Alaia, Chanel, and Alexander McQueen.

The couple’s divorce is finalized in San Mateo court.

De Baubigny discusses how engineers are just as critical to a company’s success as a strong CEO.

De Baubigny talks about the “War for Talent” recruiting in Silicon Valley:

You always want to look at the right situation and really examine the fundamentals of each company, to really think about what is the fit you are trying to make. Fundamentally, what is the skill set you’re looking to bring, what are the objectives of the business, and what’s the culture.

Gwyneth Paltrow’s Goop magazine highlights de Baubigny in a feature about the daily life of busy women. In the article, de Baubigny describes her typical day (Sept 16, 2010) and gives a list of her top-10 time savers:

As a full-time working mother, wife, mother to two children (ages 6 and 3 1/2) and, as my husband will tell you, someone who likes to “do it all,” every day is a constant juggle and quest to create more time. I get up between 5:30am – 6am and quickly scan my email. Then my priority is exercise. If I can work out each day, I’m a really happy person.  I was given an amazing present of a makeup lesson with Wallet Lubrich. She taught me how to do my daily makeup in 5 minutes.

My day is packed back-to-back from the moment that I arrive until the moment that I leave. When I’m driving to a meeting, I bring a call list with me so that I can quickly return calls. On a Friday afternoon, I’m given the list of outstanding calls/topics/decisions that I need to make over the weekend. I carve out key moments during the weekend to do emails and return calls. During other windows, I turn my Blackberry off so that I can focus 100% on my children and my husband.