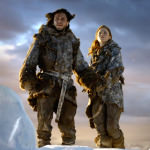 Harington appears as Jon Snow in the sixth episode of the third season of Game of Thrones, The Climb. Rose Leslie plays Ygritte, a young redheaded female wildling warrior in the army of Mance Rayder, the King-Beyond-the-Wall. As their forward party approaches the Wall of Westeros, Jon and Ygritte discuss the climb they are going to have to make. Ygritte reveals to Jon that she knows he is still loyal to the Night’s Watch, but says that they must be loyal to each other. While climbing, Ygritte dislodges part of the wall, leaving them dangling. A wildling above them cuts the safety rope to save the rest of the group. Jon is able to save himself and Ygritte, and they reach the top of the wall.