Before this gets out to the media, I would like to announce to my fans that I am pregnant #BabyBoy.

Michele performs On My Way during The Ellen Show to promote her album Louder. Michele appears on the cover of the April 2014 issue of Seventeen magazine. She talks about a Glee spin off and her album she is working on.

I set out to make a really pop-heavy album that was fun and empowering – I love Katy Perry and Kelly Clarkson! But then I found myself picking and writing these songs that were very emotional and dramatic. Louder has songs that express extreme love and some pain. I look at it and think, That was my year. I didn’t record any songs that I didn’t completely relate to. 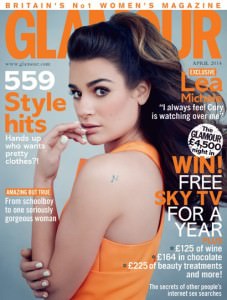 Michele appears on the cover of the April 2014 issue of Glamour UK magazine. She talks about the toughest year of her life with the magazine.

I always feel Cory watching over me.

Michele performs On My Way on The Ellen Show from her album Louder. 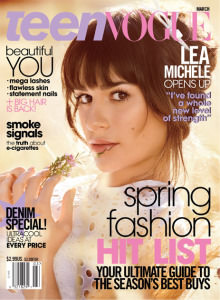 Michele appears on the cover of the March 2014 issue of Teen Vogue magazine. She talks about staying strong and kissing on the set of Spring Awakening.

During the hayloft scene, where we always open-mouth kissed. I had the stomach flu and I was going to vomit in your mouth. You opened your mouth and I was like, “Nuh-uh.”

Michele performs Cannonball on X Factor from her album Louder.

Elle Magazine interviews Michele about the death of her boyfriend and costar Cory Monteith.

A lighthouse doesn’t save the ships; it doesn’t go out and rescue them, it’s just this pillar that helps to guide people home. Someone once told me that, and I love the image. Lately, I’ve been using it as a guiding metaphor. I never thought I would be in this position in my whole life. Michele tells Shape Magazine about Hands for Habitat, an online auction which benefits Habitat For Humanity.

It’s such an amazing cause! We have all these handprints, which you can find on the Valspar Facebook page. You can bid on them and all the donations and proceeds go to the Habitat for Humanity Disaster Response Program. It’s really such a great thing that so many people have donated their hand prints and have gotten super creative, although mine are definitely the best and should be bid on the most (laughs). 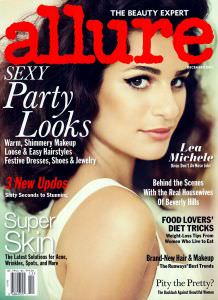 Michele appears on the cover of the December 2011 issue of Allure magazine. She talks about people trying to change her and accidently being a diva.

I came from the theater world, where the word ‘diva’ was awesome. But it’s different in Los Angeles. And this all happened to me so quickly. But I came to L.A., and the first audition I went on was for Glee. And I was on the show two months later and had a very different life. Michele appears on the cover of the March 2011 issue of Glamour UK magazine. She talks about going from an unknown to a star and about rumours about herself.

If a man is strong and opinionated, he’s considered powerful, but if you’re a woman, it’s regarded negatively. Michele appears on the cover of the March 2011 issue of Cosmopolitan magazine. The cover is controversial for her fan’s parents. The publisher of the magazine says:

We’re thrilled to feature Lea Michele on the March cover of Cosmopolitan and think she looks stunning, Michele is a grown woman and Cosmopolitan is a magazine for adults. Michele and Monteith appear on the cover of the December 2010/January 2011 issue of Teen Vogue magazine. Michele talks about going from Broadway to the small screen and Cory talks about how he stays out of the tabloids.

I see the people in the tabloids, the ones that get bad press, who have kind of gone off the edge, and I try to study them so that I don’t do that. It seems like they lost focus at some points, that’s the one thing they all have in common. The beauty of this show is that it’s impossible for us to do that. We work 24/7/365. And I love it.

Michele is nominated for Outstanding Lead Actress in a Comedy at the 62nd Primetime Emmy Awards for portraying Rachel Berry on Glee.

The ceremony is on my birthday, so it’s like the best birthday present in the entire world… What a great birthday party. I think last year mine was at a sushi restaurant or something.