‘Suarez 9’ shirts on sale in Barcelona 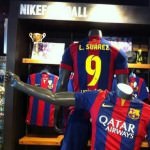 FC Barcelona shirts printed with Luis Suarez’s name go on sale at merchandiser Futbol Mania in Spain, preempting an expected £63 million move by the 27-year-old Uruguayan forward away from the Barclays Premier League’s Liverpool FC. The shirts feature the squad number 9, which currently belongs to Chilean Alexis Sanchez who is in the process of signing for Arsenal FC for a reported 32 million pounds. The shirts are yet to go on sale in the official Barca shop or be featured on the club’s official website. Suarez remains under a four-month ban from all football activities and a stadium ban, imposed for improper conduct during the 2014 World Cup.