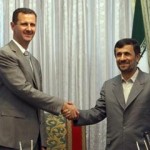 During his official state visit to Tehran, Assad receives Iran’s highest national award in recognition of his support for the Palestinians, Lebanon, and his “rejection of global arrogance”. In a ceremony broadcast on Iranian state-run television, Ahmadinejad presents Assad with the Islamic Republic’s Medal of Honor. Ahmadinejad:

We are two governments and nations that are brothers. If it were not for Syria’s resistance against the Zionist regime [Israel] and its supporters, no country in our region would have remained safe from the Zionists’ aggression and there would be no sign of Palestinian resistance…Re-invigorating the front of resistance will not only persuade other countries and nations to join the front, but also pave the ground for the consolidation and stabilization of peace in the region…Syria is a benefactor to Muslims, Arabs and even to humanity.