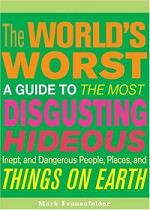 Frauenfelder publishes the book, which is intended as a catalogue of the worst people, places, and things. It includes entries on Miracle Mike The Headless Chicken, the world’s least adorable pet who survived for 18 months after being decapitated and was fed corn mash down his severed neck to keep him alive, the worst diet, Breatharianism, in which an Australian woman claims to have lived only on air and light since 1993, and the craziest scientist, Dr. Sidney Gottlieb of the CIA, who ran the MK-Ultra mind-control-experiment project and drugged people including the artist Stanley Gottlieb with acid, to see how they would react.