Ultimately the pie tasted delicious, but the phyllo dough that made such a pretty presentation was a crumbly nightmare to serve.

Jailbird Cake was maybe one of the easiest things I’ve ever not baked. All you have to do is whip some cream, buy some chocolate wafers and assemble. I did, however, notice that the recipe on the back of the Nabisco Famous Chocolate Wafers was the exact same as Goop’s. This disappointed me and I had to make a conscious decision to uncouple from that fact.

Paltrow responds to Stewart’s comments that she should concentrate more on acting and less on her lifestyle brand GOOP at the Fortune Most Powerful Women Summit in Dana Point, California. 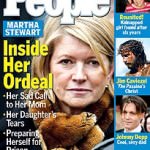 Stewart appears on the cover of People after she was convicted of four felony charges. Stewart was ordered by a judge to spend 10-16 months in prison. Her lawyer, Morvillo:

We failed you, and I’m sorry. It’s been pure torture for the last two years.