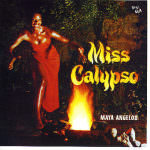 Recorded by Scamp Records in November, 1956 and released in 1957, this is Angelou’s first and only music album.

I was asked to make the album, I was invited, and then I was told I had to write some of the songs, and if I didn’t I couldn’t make the album. So I wrote, I think six of them….I wrote the songs and sang them and did the whole album in a week. I love calypso the way I love blues and country-western music because with calypso the lyrics tell stories. They are not just about “I love you baby” and “let’s make love”…something rawer than that. So the calypsos, each one, tell a story, and such a human story. So that’s what drew me to it.