Miller says she had taken two pictures of Gibson leaving a cinema in the city with Ross when she claims he charged after her, spitting in her face and calling her a “dog”.

I took two frames and then I ran to get in front of them. I turned around with my back to them and ran forward and the next thing I knew he had shoved me in the back from behind…I was just shocked that I was being pushed, shoved in the back…I thought he was going to punch me in the face.

There was no physical contact whatsoever with this photographer, who was harassing my client and his friend.

In this thriller, directed by Robert Rodriguez, Gibson plays Luther Voz.  Machete, who is recruited by the President of the United States for a mission which would be impossible for any mortal man, must take down a madman revolutionary and an eccentric billionaire arms dealer who has hatched a plan to spread war and anarchy across the planet. Machete meets Mendez and learns that his heart is connected to the missile and only the arm dealer Luther Voz is capable to disarm the bomb. Co-starring Danny Trejo and Alexa PenaVega.

He’s an evil genius, he’s kind of like a Bond villain in the gutter. Bad guys are always more fun, and if you can find the bad in a good guy, it’s always more fun.

In this drama, directed by Adrian Grunberg, Gibson plays as a career criminal nabbed by Mexican authorities. He is placed in a tough prison where he learns to survive with the help of a young boy. Co-starring Kevin Hernandez and Daniel Giménez Cacho. Grunberg:

There are elements of Mel in there—especially the comedic elements, which are very Mel. You never know what this guy has been through in the movie. You know, we never tell you what he’s done in the past. It doesn’t really matter because he redeems himself in the end.

In this drama, directed by Jodie Foster, Gibson plays Walter Black. Plagued by his own demons, Walter Black was once a successful toy executive and family man who now suffers from depression. No matter what he tries, Walter can’t seem to get himself back on track until a beaver hand-puppet enters his life. Co-starring: Jodie Foster and Anton Yelchin. Foster:

He’s an amazingly talented person. We all know the strength he shows on the screen. He’s also witty. He can be funny and charming. I knew he would bring an affability to the role of Walter. He’s a soulful, interesting guy who knows a lot about struggle. And he’s very articulate about that and is interested in all the things Walter is interested in. Transformation. Change. The relationship with his son.

In this drama, directed by Martin Campbell, Gibson plays homicide detective Thomas Craven. As he investigates the death of his activist daughter, he uncovers not only her secret life, but a corporate cover-up and government collusion that attracts an agent tasked with cleaning up the evidence. Co-starring Ray Winstone and Danny Huston.

The stress, the traumatic experience of losing a child like that, has him just a little unhinged and walking around most of the time in a state of near breakdown. He is close–right at the edge–but he can’t let it crack too much because he’s got a job to do. 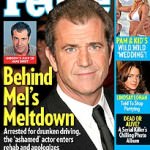 Gibson appears on the cover of People to discuss how much he’s ashamed of his behavior.

I acted like a person completely out of control … and said things I do not believe to be true and which are despicable. I am deeply ashamed.

The actor is charged with misdemeanor drunken driving, driving with an elevated blood alcohol level and possession of an open container of alcohol in his car. Gibson’s publicist, Alan Nierob, says that he has no comment.

We’ve only got forty-five seconds and I don’t want to hog the limelight from these two gentlemen who really deserve the statue. Thank you again, all those people I thanked before. And I owe a special debt of gratitude to Bruce here, and Alan.

The actor receives an Oscar for best director for the movie, Braveheart, at the 68th Academy Awards. Gibson begins his acceptance speech when he says:

Oh, I don’t write speeches but I would like to thank a few people. And I have it on a list, not a long list. Not too long anyway.

In the second of the series, Gibson plays Max, a former Australian policeman, who is living in the post-apocalyptic outback as a warrior who agrees to help a community of survivors living in a gasoline refinery. He defends them and their gasoline supplies from evil barbarian warriors. Co-starring  Bruce Spence and Emil Minty,

We filmed in the only place nobody would go, where the turd wranglers would drop all their sh–. It wasn’t glamorous at all. It was low-budget. Twenty-five guys in the crew. You didn’t have a trailer. You want to change your costume? Go over to the side of the road and strip down. That was it.

Gibson plays the role of Mad Max Rockatansky, an Australian policeman who sets out to avenge his partner, wife and son’s  death which was a result of a motorcycle gang’s retaliation for the death of their leader:

It was the only job. I just walked in and director George Miller asked me to tell him a joke. I did, and I got the gig.

What's this? This is an unbiased just-the-facts news timeline ('newsline') about Mel Gibson, created by Newslines contributors. Make it grow it by finding and summarising news. Learn more