McSpadden and Brown Sr. voice their opinions on respect, equality and the justice system. McSpadden:

Why is it so important to cover this up for this man, he is wrong. What does this do for Ferguson….really.

McSpadden and Brown Sr. give their account on the events that happened in Ferguson on August 9th, 2014. McSpadden:

My son was running for his life and his father has had a conversation with him about how to deal with the authorities if you’re approached.

My son respected law enforcement, who in their right mind would rush or charge at a police officer that has his gun drawn. It sounds crazy.

Crump: When you have people of color be killed they try to demonize and play on the stereotypes, and they try to put the police officer who killed our children on a pedestal. It’s just not right, and we have to fix this system.

We are profoundly disappointed that the killer of our child will not face the consequence of his actions. While we understand that many others share our pain, we ask that you channel your frustration in ways that will make a positive change. We need to work together to fix the system that allowed this to happen.Join with us in our campaign to ensure that every police officer working the streets in this country wears a body camera.We respectfully ask that you please keep your protests peaceful. Answering violence with violence is not the appropriate reaction.Let’s not just make noise, let’s make a difference

Brown, McSpadden and Brown Sr. give their reactions to the grand jury decision, officer Wilson and the violence in Ferguson. McSpadden:

My son doesn’t have a history of violence, one image does not paint a persons entire life or their entire past on how they were. We all do have a past….

The grand jury decides that Wilson will not face charges in the shooting death of Brown. St. Louis County Prosecuting Attorney McCulloch says the 12 members of the grand jury had met on 25 separate days over three months and heard testimony from about 60 witnesses, along with experts on blood, DNA, toxicology and firearms.

He said many witness accounts, many on social media, conflicted with the case’s physical evidence. For example, he added, some witnesses said Brown was shot in the back while running away from Wilson, but autopsy results showed no wounds to the back of his body.

There is no question that Darren Wilson caused the death of Michael Brown by shooting him, but the inquiry does not end there. But the duty of the grand jury is to separate fact and fiction…no probable cause exists to file any charges against Darren Wilson. 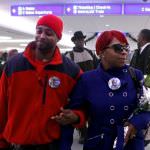 McSpadden and Brown Sr. return to St. Louis after speaking at a United Nations Committee regarding human rights. Brown Sr. speaks to a small group gathered at the airport thanking them for their support:

The trip to Geneva was beautiful, I had a chance to express the loss and the things that are going on in Missouri.

McSpadden, Brown Sr. and several activists present a report to the United Nations, alleging the shooting of their son by Ferguson Police Officer Darren Wilson and police tactics used against protesters in the following days violate the U.N.’s anti-torture convention. The report also requests for  Gov. Jay Nixon to apologize to protesters and the resignation of Ferguson Police Chief Thomas Jackson. Human rights attorneys:

The report addresses the torture and/or cruel inhuman and degrading treatment of protesters and those killed by law enforcement.

McSpadden and Brown Sr. speak about their United Nations trip to Geneva, Switzerland, their overall mission and police brutality. McSpadden:

We have been received very well, they have given us a lot of love and support since we have been here and everything seems to be positive. It is a great experience.

McSpadden and Brown Sr. travel to Geneva, Switzerland to address the members of the United Nations about bringing international awareness to the shooting death of their unarmed son. They speak about police brutality and the latest events happening in Ferguson.

Michael was my first born, he was the leader of the pack for my two daughters and my other son. He was meek, he was humble, he was tall and he was mine.

McSpadden and Brown Jr. voice their trust issues with the government and Attorney General, Holder. McSpadden:

Just hearing the words come directly from his mouth face to face, he made me feel like one day I will and I am not saying today or yesterday but one day they’ll regain my trust.

McSpadden and Brown Sr. speak about the loss of their teenage son, Brown. They are requesting the grand jury to indict Ferguson police officer Darren Wilson. McSpadden:

He took my son away for nothing.

Brown’s parents, McSpadden and Brown Sr. speak with Cooper about the tragic shooting death of their son. They confirm their confidence with the Ferguson justice system, voice their opinions on a grand jury decision and involving the Federal government. McSpadden:

Even if this hadn’t happened people ridicule each other anyway, but he was a teenager, he was growing up, he was only 18. He had a chance to make a mistake and correct it just like the officer, he had a choice and the officer chose the wrong one. Was it really necessary…No. My son was only 18, only 18.

What's this? This is an unbiased just-the-facts news timeline ('newsline') about Michael Brown Sr., created by Newslines' contributors. Help us grow it by finding and summarising news. Learn more