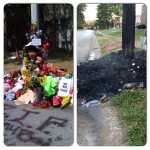 A memorial honoring Brown is burned down, The Ferguson Fire Department receive a call around 6:45 a.m. and arrive to find the memorial in flames. Fire officials are not sure what caused the fire and witnesses believe that the fire was set intentionally. Ferguson Police Chief Tom Jackson:

Police did everything they could to put out the fire before the fire department arrived on the scene. We’re all saddened by the fire that was reported at one of the Brown memorials this morning and are trying to obtain as much information as possible to determine what happened. To anyone who believes we didn’t do everything in our power to put this fire out I want to apologize and let you know that was not the case.