Netflix purchases the rights to produce a feature film based on Hastings book The Operators: The Wild and Terrifying Inside Story of America’s War In Afghanistan. Pitt will star as the military general in the satirical comedy. The film will be released in 2016.

Hastings publishes an op-ed on BuzzFeed about the Democratic stance on civil liberty:

Besides Senators Ron Wyden and Mark Udall, most Democrats abandoned their civil liberty positions during the age of Obama. With a new leak investigation looming, the Democrat leadership are now being forced to confront all the secrets they’ve tried to hide.

first they came for manning. Then Assange. Then fox. Then the ap.drake and the other whistle-blowers. Any nyt reporters too.

In an appearance on the Current TV program The Young Turks, Hastings describes a war on journalism by the Obama administration: 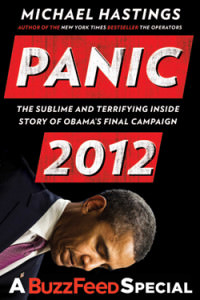 Hastings publishes Panic 2012: The Sublime and Terrifying Inside Story of Obama’s Final Campaign in an ebook format. Publisher Blue Rider Press says the book is written in the style of Hunter S. Thompson’s Fear and Loathing on the Campaign Trail and calls it

a firsthand account of the madness traveling with the White House press corps, bringing to life a series of unforgettably strange moments from the trail.

The report is one of 5 million documents leaked by WikiLeaks and examined by the magazine. 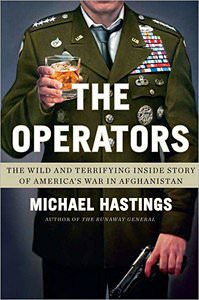 Hastings’s book about the Afghanistan War and former General Stanley McChrystal is published. The book is based on his 2010 article The Runaaway General. In the book, Hastings discusses the impressions American soldiers have of the Afghans:

So, you know, it’s really hard to kind of get the full impact of it. I mean, I have page after page. I sort of did it just to sort of really, really hit it home, you know, people complaining about how—Americans complaining about how the Afghans smell, Afghans complaining that the Americans are, you know, doing disgusting things in front of their women. You know, but it’s one of the things—you know, Americans complain that the Afghans are cowards, and the Afghans complain that the Americans are cowards. So there’s this complete lack of understanding between two sides. And why that’s important is that our entire strategy that they’ve been pushing—by “they” I mean the Pentagon and the generals over there—is based on this idea that each American soldier is going to become this kind of sociologist, diplomat, anthropologist, killer.

I didn’t think I could love again. I feel very blessed and fortunate that Elise would have me. The fact that she was able to get past that—I feel pretty lucky.

The magazine releases a statement defending Hastings and the article’s accuracy following the Pentagon report:

The report by the Pentagon’s inspector general offers no credible source – or indeed, any named source – contradicting the facts as reported in our story, The Runaway General. Much of the report, in fact, confirms our reporting, noting only that the Pentagon was unable to find witnesses “who acknowledged making or hearing the comments as reported.” This is not surprising, given that the civilian and military advisors questioned by the Pentagon knew that their careers were on the line if they admitted to making such comments. Asking unnamed sources to reveal their identities strikes us as an exercise in futility. Rolling Stone stands by our story, which is accurate in every detail. We also note that Gen. Stanley McChrystal’s own response to the story was to issue an apology, saying that what was reflected in the article fell “far short” of his personal standard.

McChrystal and aides are cleared of wrongdoing in a report released by Pentagon investigators. The Pentagon finds “insufficient” evidence that the general violated Department of Defense standards. The report also questions the accuracy of the Rolling Stone profile by Hastings:

Hastings wins the George Polk Award for Magazine Reporting for “The Runaway General”. The committee calls it

a history-making piece that prompted President Obama’s dismissal of U.S. Army Gen. Stanley McChrystal as commander of all U.S. and NATO forces in Afghanistan.

Huffington Post names Hastings one of 2010’s Game Changers in Politics for “The Runaway General”:

In late June 2010, the unpopular war in Afghanistan was dragging on, but had fallen off the front page. Then came the “Runaway General,” a blockbuster Rolling Stone article by Hastings, who had just spent most of the spring hanging out with Gen. Stanley McChrystal, the commander of American forces in Afghanistan, and his entourage. They sounded out of control: McChrystal’s aides slagged Vice President Joe Biden and boasted that their boss had intimidated President Obama. For his part, McChrystal was unabashedly dismissive of his State Department colleagues. Hastings exposed a fraying strategy and an out-of-control military. After the article was published, the president forced McChrystal to step down and Afghanistan was once again on the front page.

A source says that the quotes in Hastings’s Rolling Stone profile of McChrystal come from junior staff:

Men who “make tea, keep the principal on time and carry bags” — who had no reason to believe their words would end up in print…

Hastings publishes a Rolling Stone profile of Gen. Stanley McChrystal, the commander of all U.S. and NATO troops in Afghanistan. The article includes descriptions of McChrystal and his team mocking Biden, Obama, and others:

Are you asking about Vice President Biden?” McChrystal says with a laugh. “Who’s that?”

Another aide describes McChrystal’s response to a meeting with Obama:

It was a 10-minute photo op, Obama clearly didn’t know anything about him, who he was. Here’s the guy who’s going to run his f-cking war, but he didn’t seem very engaged. The Boss was pretty disappointed.

Rolling Stone Editor Eric Bates says all comments were run by the General’s team before publication. 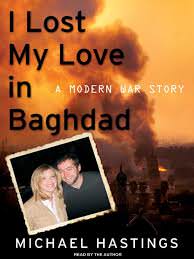 Scribner publishes Hastings’s first book, a memoir of his relationship with aid worker Parhamovich before her death in a car bombing in Iraq. Hastings does not originally intend to write a book about the war, but is moved after his fiancee’s death:

When that happened, I had a lot to say. I felt here’s my chance to write a final love letter to Andi.

In the summer of 2005, Hastings arrives in Baghdad to serve as a war correspondent for Newsweek for a year and a half. He becomes interested in writing stories as an embedded journalist:

I started covering war in 2005 in Baghdad, and what I realized was that there’s this whole embed culture among the troops, but that there also existed one among the generals; the ones who are actually running the war. So I put in an embed request to run with General Casey and they were like, what are you talking about?

At one point, he spends three weeks embedded with a unit in the heat of summer, and is later threatened with bodily harm. Bureau Chief Scott Johnson remembers:

…his ire was never directed toward the grunts with whom he spent so much time. Instead he sought to portray their experiences in what he knew was the larger context of a failed war.

During his last semester of college, Hastings starts work as an unpaid intern for Fareed Zakaria at Newsweek International.

During his freshman year at Connecticut College, Hastings continues experimenting with drugs a la his hero, Hunter S. Thompson. In addition to drinking heavily, he uses Adderall, cocaine, and crack. He neglects his grades and is asked to leave the school, moving back in with his parents in Burlington, Vermont.

What's this? This is an unbiased just-the-facts news timeline ('newsline') about Michael Hastings, created by Newslines' contributors. Help us grow it by finding and summarising news. Learn more