Lewinsky delivers a talk on cyber bullying and calls for a more compassionate internet at TED 2015 conference.

When my story broke it broke online. It was one of the first times that the traditional news had been usurped by the internet for a major news story. I went from being a private figure to being a publicly humiliated one worldwide. There were mobs of virtual stone-throwers. I was branded a tart, a slut, a whore, a bimbo. I lost my reputation and my dignity and I almost lost my life. Seventeen years ago there was no name for it, but now we call it cyberbullying or online harassment.

Every day online, people – especially young people who are not developmentally equipped to handle this – are so abused and humiliated that they can’t imagine living to the next day. And some don’t.

Monica Lewinsky: The price of shame

Lewinsky speaks to a group of young people regarding her romance with former President Bill Clinton, public embarrassment, jail threats and online hate.

The experience of shame and humiliation online is different than offline. There is no way to wrap your mind around where the humiliation ends, there are no borders it honestly feels like the whole world is laughing at you. I know….I lived it. 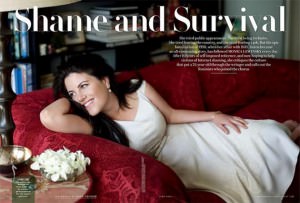 Lewinsky writes an essay for Vanity Fair, detailing her personal feelings about her affair with former president Bill Clinton. This is the first time Lewinsky has addressed the affair in detail in a public forum. Lewinsky claims the broken silence is a form of “taking back my narrative” to “give a purpose to my past.” The piece describes the way the Clinton administration branded Lewinsky as a perpetrator, claiming she “was made a scapegoat in order to protect his [Clinton’s] powerful position.”

That was one of the worst days of my life. I was a virgin to humiliation of that level until that day. To be in the vortex of this media maelstrom was quite alarming, and frightening and confusing. I think a lot, too, had to do with the fact that I was a woman. To be called stupid, and a slut, and a bimbo, and ditzy, and to be taken out of context…it was excruciating.

She details the difficulty she had in finding employment, as well as the moral conflict she felt over lucrative offers to share her story with the media. Her goal moving forward, she writes, is to help victims of online harassment, claiming that she was “possibly the first person whose global humiliation was driven by the Internet.”