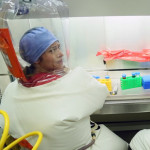 Researchers at the University of Texas Medical Branch and NIH use an aerosol vaccine that activates immune cells in the respiratory system of rhesus macaques and provides full protection against the virus. The vaccine can be used without any medical administration, so that developing countries can help themselves. Doctors say it’s not a breakthrough because a cure for monkeys does not necessarily have to be successful for humans as well. Virologist:

The initial several decades of attempts to develop a vaccine against the Ebola virus were unsuccessful. This is one of the few vaccines that works.

The House of Representatives pass the “21st Century Cures Act” which increases research funding through the National Institutes of Health (NIH) by $9 billion over the next five years. The bill also provides $550 million over the next 5 years to expedite the discovery and approval of drugs by the Federal Food and Drug Administration (FDA). The bill also adds provisions to give drug companies more time to market drugs and increase the efficiency of collecting patient input. Some researchers and consumer advocates say the bill includes provisions that cuts corners in the drug approval process that undermine patient safety. Critics:

Some aspects of the bill could indeed enhance the development of and access to new drugs. Embedded in the language of the 21st Century Cures Act are some good ideas that could streamline the development and evaluation of new drugs and devices; its call for increased NIH funding may prove to be its most useful component. But political forces have also introduced other provisions that could lead to the approval of drugs and devices that are less safe or effective than existing criteria would permit

What's this? This is an unbiased just-the-facts news timeline ('newsline') about National Institutes of Health, created by Newslines' contributors. Help us grow it by finding and summarising news. Learn more