Cannon instagrams a selfie from the hospital without sharing what he’s been hospitalized for.

Dont worry, Temporary pit stop… Sometimes I can be a little too bull headed and stubborn. I gotta stop running my body to the ground. I be wanting to grind nonstop but the engine can’t run on fumes. On the low though, I really think I’m a super hero… Now I’m not saying I’m Batman, but I am saying nobody has ever seen me and Batman in the same room together. LOL #ImGood

Jessica fully respected Nick’s relationship and would never get in between anything with them. When Nick was going through his breakup, Jessica was there for him as a friend. Cannon promotes his new book Roc and Roe’s 12 Days of Christmas, a children’s book based on his twins with Mariah Carey, Moroccan and Monroe, during an interview on Good Morning America. Cannon says that even though he and Carey are separated, family is the most important.

Always focus on family. We’ll forever be family. At the same time, we’re there for our children, making them the No. 1 priority and understanding they’re loved and can have an amazing holiday. It’s always a house full of people and pets and dogs. Christmas Eve we like to have sleigh rides and reindeer. It’s a lot of fun. So when you read the book, everything seems over the top, but it really happens.

Cannon displays his newly altered tattoo at his birthday celebration at the Playhouse in Hollywood. His previous Mariah tattoo now appears to be Jesus on the cross with angel wings. Cannon:

I finally got Mariah off my back!

Cannon and Carey separate after six years of marriage. Despite the rough patch in their marriage, the pair spent Mothers’ and Fathers’ day with their twins. Source:

They’ve been living apart for months. He’s been staying in hotels. 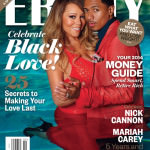 Cannon and his wife Carey appears on the cover of Ebony to discuss their secrets to a happy marriage.

It was early on when I found out how spiritual she was, and we had conversations about kids and how to live life. For her to share these values, it instantly let me know this is the person I’ve always wanted.

Nick Cannon performs an improvisational version of the twerk dance as he sings to one of the audience members on The Arsenio Hall show in Los Angeles, California. Cannon and Carey renew their vows after five years of marriage at Disneyland California. Carey and daughter Monroe were picked up in a horse-drawn Crystal Carriage from a Dream Suite inside the Pirates of the Caribbean attraction, then taken to Main Street to meet Cannon and son Moroccan. Together the family proceeded to Sleeping Beauty Castle, for the vow renewals.

On our way to renew our vows. I love you @Nick Cannon.

We had a meeting about the video shoot at the Beverly Hills Hotel, and I ordered french fries. I always say grace over my food coming from a family of ministers, it’s the way I was raised so I said, Can you excuse me for a minute? and bowed my head. She said, You ain’t gonna pray over my food, too! I do the same thing! A lot of people say they’re spiritual cause it seems like the right thing, but then she pulled an electronic Bible out of her purse. I never meet anyone in the business that’s on the same level as I am spiritually, so that was the first thing that opened my eyes to, Whoa, this could be something unique. We spent the next weekend together, but it felt more like a getaway than a video shoot. It was also her well, she doesn’t have birthdays; she has, like, anniversaries of her twelfth birthday, so we had that celebration, and all weekend we were like, You too! No way get outta here! Carey and Cannon marry in a surprise sunset wedding on her estate in the Bahamas.

The ceremony was really beautiful and sweet … very understated. We really do feel we are soulmates.

What's this? This is an unbiased just-the-facts news timeline ('newsline') about Nick Cannon, created by Newslines' contributors. Help us grow it by finding and summarising news. Learn more