Spider-Dan: He will be in the zone 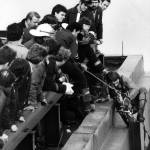 Dan ‘Spider-Dan’ Goodwin says he will be watching Wallenda’s skyscraper walk in Chicago, the same city where he was nearly killed in 1981, as city firemen turned a firehose on him at the orders of the fire commissioner as he clung to a climbing hook on the outside of the 37th floor of the Hancock Centre. He says Wallenda, who has the support of city authorities unlike Dan’s illegal climbs in the 80s, will be in the zone:

Something happens when your life is on the line. There is no pain. There is no tired. When Nik steps out on that wire, he’s going to be there. He has to be in that place. We all have one thing in common. When it comes time to do what we do, we drop into this zone. There is bliss.