To walk between Chicago skyscrapers 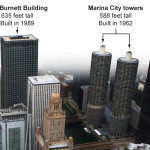 Wallenda will walk uphill at a 15-degree angle from the Marina City west tower to the top of the Leo Burnett tower across the Chicago river, and then walk blindfolded between the two Marina City towers. (Infographic here.) The towers have previously appeared in film when Steve McQueen chased a fugitive around the west tower’s parking ramp in The Hunter. They were also featured on the cover of Wilco’s album Yankee Hotel Foxtrot. Discovery will broadcast the walk with a 10-second delay, allowing cameras to cut away if Wallenda falls. He will not use a net or harness for the walk. Preparations have taken months, with helicopters lifting cable to rooftops, roads closed, and clearances obtained from the FAA and Coast Guard. Residents of the towers have been asked not to use laser pointers, camera flashes, or drones, and are being prevented from grilling food. Wallenda has practiced the walk in Florida.