He’s the best. He’s the most thoughtful human being on the planet.

most beautiful morning ever…

Reed gets engaged to Somerhalder. Source:

She accepted with glee. She is madly in love.

At the time their split was announced, they had been separated for six months but still working [together] on their debut album, I’m Not Falling. They remain best friends and look forward to their continued journey together. 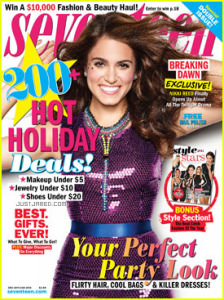 Reed appears on the cover of the January 2012/December 2011 issue of Seventeen magazine. She talks about behind the scenes of Twilight and people’s misconceptions of her.

I got typecast as a party girl when Thirteen first came out. The funny thing was, I was a virgin, I didn’t do drugs and I barely drank. Reed marries McDonald at a private ranch in Malibu, California, in front of 100 guests.

We couldn’t be happier! [We were] surrounded by our family and friends. We’re so glad this day has come!