The Prince of Winterfell 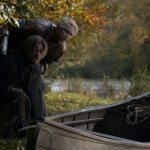 Coster-Waldau appears as Ser Jaime Lannister in the eighth episode of the second season of Game of Thrones, The Prince of Winterfell. Gwendoline Christie plays Brienne of Tarth, a female soldier loyal to Lady Catelyn Stark. Intending to ransom the captive Jaime to the Lannisters in return for the release of the Stark noble family’s two daughters, Brienne keeps him under guard as they travel towards King’s Landing.