What's this? This is an unbiased just-the-facts news summary about Novak Djokovic, extracted from the original article by Newslines' contributors. To see the newsline of each topic, click the links below. Learn more 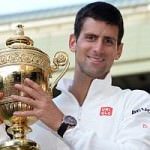 The athlete wins his second Wimbledon title after beating Roger Federer in five sets: 6-7(7), 6-4, 7-6(4), 5-7, 6-4, which lasted for 3 hours and 55 minutes. The player wins in the last set with the help of four mistakes by his opponent, denying the Swiss player his eighth title in the said tournament. Novak’s victory in the Wimbledon Gentlemen’s singles final and his seventh Grand Slam title means that he also reclaims his no. 1 spot in the ATP. Federer claims the match is dramatic.

You know going into a match with Novak, it’s always going to be tough. It had everything for fans to like, the swing of momentum in the first set, him coming back in the second and third, all the back and forth in the fourth set and all the dramas in the fifth.