What's this? This is an unbiased just-the-facts news summary about Osama Bin Laden, Rob O'Neill, extracted from the original article by Newslines' contributors. To see the newsline of each topic, click the links below. Learn more 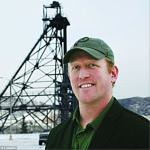