What's this? This is an unbiased just-the-facts news summary about Peter Dinklage, extracted from the original article by Newslines' contributors. To see the newsline of each topic, click the links below. Learn more 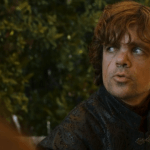 Dinklage appears as Tyrion Lannister in the first episode of the fourth season, Two Swords. Tyrion learns that Prince Oberyn Martell of Dorne, played by Pedro Pascal, is in King’s Landing seeking revenge against the Lannisters for the death of his sister. Tyrion tries but fails to comfort his new wife Sansa Stark, played by Sophie Turner, following the killing of her family members by Lannister loyalists.