Gabriel is interviewed by Rolling Stone, about the possibility of a future Genesis reunion tour:

Gabriel also discusses the recent induction of Genesis to the Rock & Roll Hall of Fame.

Getting awards is nature’s way of saying you’re getting old, so you can get a little more reflective. There are very few good things about getting old except you care less about what people think.

Gabriel is inducted into the Rock & Roll Hall of Fame at the 29th induction ceremony.

Because this is a recognition for all your work, it means a lot more  to me than an award for a single or an album. It’s also great to get some acknowledgement from your peers.

Gabriel performs Solsbury Hill during The Late Show with David Letterman to promote his self titled album.

Gabriel wins the Grammy for Best New Age Performance for Passion – Music For The Last Temptation Of Christ.

Gabriel talks about The Lamb movie to KR0Q Radio in Los Angeles:

I hope so. I spent a couple of months working with Alexander Jodorowsky, who directed El Topo, Tar Babies and Holy Mountain, which were not very well known, but are cult movies over here. I felt instinctively that he really understood what I was trying to articulate on that album and the story. We changed a few things, and finished the script, and handed it over to the film company who are a little reluctant to put the money up when I was dropped by the American label over here. So it’s hovering in the balance a bit, because even though there is the name of Genesis to sell the soundtrack, they also want a return from their investment on my product as well. So I’m hoping we can get things sorted otherwise we’ll look for other backers. But is is hovering in the balance at the moment.

Gabriel writes why he left the band in Melody Maker:

I had a dream, eye’s dream. Then I had another dream with the body and soul of a rock star. When it didn’t feel good I packed it in. Looking back for the musical and non-musical reasons, this is what I came up with:

OUT, ANGELS OUT – an investigation.

The vehicle we had built as a co-op to serve our songwriting became our master and had cooped us up inside the success we had wanted. It affected the attitudes and the spirit of the whole band. the music had not dried up and I still respect the other musicians, but our roles had set in hard. To get an idea through “Genesis the Big” meant shifting a lot more concrete than before. For any band, transferring the heart from idealistic enthusiasm to professionalism is a difficult operation.

I believe the use of sound and visual images can be developed to do much more than we have done. But on a large scale t needs one clear and coherent direction, which our pseudo-democratic committee system could not provide.

As an artist, I need to absorb a wide variety of experiences. It is difficult to respond to intuition and impulse within the long-term planning that the band needed. I felt I should look at/learn about/develop myself, my creative bits and pieces and pick up on a lot of work going on outside music. Even the hidden delights of vegetable growing and community living are beginning to reveal their secrets. I could not expect the band to tie in their schedules with my bondage to cabbages. The increase in money and power, if I had stayed, would have anchored me to the spotlights. It was important to me to give space to my family, which I wanted to hold together, and to liberate the daddy in me.

Although I have seen and learnt a great deal in the last seven years, I found I had begun to look at things as the famous Gabriel, despite hiding my occupation whenever possible, hitching lifts, etc. I had begun to think in business terms; very useful for an often bitten once shy musician, but treating records and audiences as money was taking me away from them. When performing, there were less shivers up and down the spine.

I believe the world has soon to go through a difficult period of changes. I’m excited by some of the areas coming through to the surface which seem to have been hidden away in people’s minds. I want to explore and be prepared to be open and flexible enough to respond, not tied in to the old hierarchy.

Much of my psyche’s ambitions as “Gabriel archetypal rock star” have been fulfilled – a lot of the ego-gratification and the need to attract young ladies, perhaps the result of frequent rejection as “Gabriel acne-struck public school boy”. However, I can still get off playing the star game once in a while.

My future within music, if it exists, will be in as many situations as possible. It’s good to see a growing number of artists breaking down the pigeonholes. This is the difference between the profitable, compartmentalized, battery chicken and the free-range. Why did the chicken cross the road anyway?

There is no animosity between myself and the band or management. The decision had been made some time ago and we have talked about our new direction. The reason why my leaving was not announced earlier was because I had been asked to delay until they had found a replacement to plug up the hole. It is not impossible that some of them might work with me on other projects.

The following guesswork has little in common with truth: Gabriel left Genesis  1) To work in theatre 2) To make more money as a solo artist 3) To do a “Bowie” 4) To do a “Ferry” 5) To do a “Furry Boa round my neck and hang myself with it” 6) To go see an institution 7) To go senile in the sticks.

The band performs Supper’s Ready from their album Foxtrot at Shepperton Studios. The filming covers two days (30- 31 October). Gabriel’s intro to the song:

Old Michael, walked past the pet shop – which was never open – into the park – which was never closed. And in the park was a very smooth, clean green grass. So Michael, took off all his clothes, and began rubbing his flesh into the wet, clean green grass. He accompanies himself with a little tune… It went like this… Beneath the ground, the dirty brown writhing things, called worms, interpreted the pitter patter from above as rainfall. Rainfall in worm-world means two things: Mating and Bathtime. Both of these experiences were found thoroughly enjoyable to the worm colony… simultaneously. And within seconds, the entire surface of the park was a mass of dirty, brown, soggy, writhing forms. He was still pleased – Old Michael, and he began whistling a tune this time, to accompany himself. It went like this:…Jerusalem Boogie to us perhaps, but to the birds it meant THE SUPPER IS READY!

The band are filmed before and during their performance at the Bataclan theater in Paris. The film shows excerpts of The Return of The Giant Hogweed, The Knife, Supper’s Ready. On The Musical Box Gabriel wears a fox head and red dress (in later tours he will use an old-man mask).

Int: When did you start to develop the theatrical side of your music?

PG: I think it came naturally… I had started to do a bit of mime and it increased with the music…and this last year it became more exaggerated than it was before…

Int: Who do you think you imitate the best ?

PG: Alice Cooper, I spent six months in the US to imitate him… and I watched 17 films of him on stage, just to copy his movements almost exactly… and David Bowie, I’ve been living with him for the last three years, which allowed me to understand a lot of his technique…

Int: But you’re the only one (in the band) to be theatrical…

PG: Of course, they’re all busy with their instruments…

TB: He’s singing, but there are a lot of moments where he doesn’t and so he must do something to get paid as much as the others…

Int: And you’ve never been tempted to act like him ? … it seems to me that Peter is the pop star, as if the others only play as a support band…

PG: No, Tony is having tap dancing lessons and next time we play in France he will do five minutes of tap dancing… and Steve does some numbers by Maurice Chevalier…

MR: The point to remember is that the theatrical side always enhances the music rather than the music… 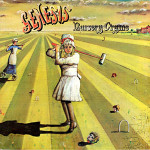