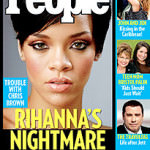 Rihanna appears on the cover of People after she heals from a brokenheart caused by her ex boyfriend, Brown. Her friends and family opens up about the relationship and the domestic abuse she received at the hands of Brown.

We have all told our children that it’s not acceptable for a man to hit a woman. It’s a big thing in our family. Brown had better hope he doesn’t run into them, or they’re going to stir things up. They’re not going to let her get in the same situation again.