Bridges reminisces on working with Williams after sighting New York character Radioman, who resembles Williams—and is said to have been the inspiration for his character in The Fisher King—at the film party for The Giver at the Central Park Boathouse:

I remember pulling up to the Boathouse where we had our party and I’m sitting there with my wife, gathering myself and I look out of the window and I say, what? Is that Robin? Is that his ghost? No! It’s Radioman. And it brought back all of these wonderful feelings of what an amazing time we had together here in New York shooting The Fisher King. And I got out of the car and embraced Radioman, looked in his face. And I remember when we were shooting Fisher King—Radioman, he knows where all the movies are shot somehow, I don’t know how he magically does that. But, I remember seeing Radioman and he could not believe that Robin’s character was here in the flesh in reality. And there he was. And so we embraced Radioman, I felt Robin’s spirit as I’m feeling it here now in this room with us. 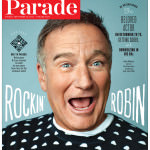 Williams is interviewed by Parade Magazine about his role in CBS’s The Crazy Ones, his first series since Mork and Mindy 30 years earlier.

It’s fun. I’m having such a blast doing it with Sarah. She’s a sweet woman. And the idea of a father-daughter relationship—since I have a daughter, I’ve done the research on that.

It’s wonderful, I went looking for her book and I found it in the fantasy aisle. With Sarah you get the feeling she was voted least likely to write a book and most likely to burn one. You look at her and wonder ‘Where did they find her, Project Running Mate?’