Dawson appears on Conan and talks about how her mom once trained her to use pepper spray by using it on her, and that New Yorkers aren’t as tough as they used to be.

I was really nervous about having to be funny. Chris said, Don’t worry about it, we got the funny covered, just bring us the drama. He let me have a lot of input with my character because I had a lot of ideas for her. And it was really nice to just put energy into this character and make her come alive. It really brought out a lot of me. I’m really grateful for it. Including my comedy, he got me to be funny, which is unbelievable.

Dawson returns as a guest on Conan to promote her latest film, Top Five. She also talks about making out with Jenny Slate in a New York Times video, and being inspired by James Franco to post “selfies” on social media.

I remember when they asked me to do it, I don’t know if that’s weird to say, but there was another actress they were talking about doing it with. Sure, that would be great. They changed and said it would be Jenny. Awesome, I have never met her before. She is hilarious and awesome and beautiful and cool and smart. So we got there, we said hello, nice to meet you like it was kind of great. It was kind of awesome. 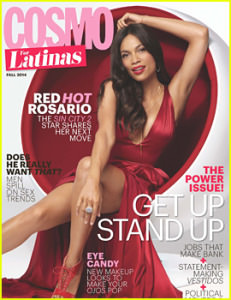 Dawson appears on the cover of the Fall 2014 issue of Cosmopolitan for Latinas magazine. She talks about what she looks for in relationships, romantic things a man can do, and her teenage years.

What's this? This is an unbiased just-the-facts news timeline ('newsline') about Rosario Dawson, created by Newslines' contributors. Help us grow it by finding and summarising news. Learn more