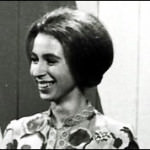 Anne and Phillips escape an apparent kidnap attempt in which four people were wounded. The royal couple are returning to Buckingham Palace along Pall Mall when their chauffeur-driven Rolls-Royce was forced to halt by another car which blocked their route. A man appears from a light coloured vehicle and fires six shots, all of which it is said were not directed at the royal couple, but leave four people in hospital.