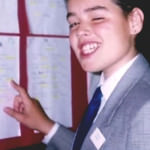 Russell Edward Brand is born in Thurrock, Essex, England to photographer Ronald Henry Brand and secretary Barbara Elizabeth Nichols. An only child, he grows up with his mother after his parents divorce when he is six months old. He develops a difficult relationship with his father, whom he seldom sees throughout his childhood. At seven years old, his mother contracts uterine and breast cancer, and he becomes bulimic at 14 years old.

To describe my mother as ‘doting’ is to underplay her adulation. She sort of adored me and is devoted to me. I’m an only child of a single mother. She had cancer three times when I was 7 and 17 and I had to live with relatives. I had sort of an unusual and often strained relationship with my father whom I’d only sort of see sporadically. So, my childhood was tumultuous.