Ginsburg reveals that producing her biopic was delayed because Portman has been holding out for a female director.

Natalie Portman came to talk to me about [the film landing a female director], and we had a very good conversation. And one thing, interesting, that she insisted on, it held up the project for a while. She said, ‘I want the director to be a woman. There are not enough women in this industry. There are many talented out there.’ And now they do have a woman director.

Marielle Heller (Diary of a Teenage Girl) is in talks to direct the film.

Portman is set to play Ginsburg in On The Basis Of Sex. The script, which follows the Ginsburg as she faces numerous obstacles to her fight for equal rights throughout her career. 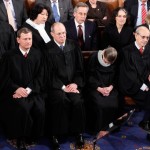 Ginsburg admits she had drank too much wine before the 2015 State of the Union address. Although she vows to not drink any more wine with dinner:

Dinner was so delicious, it needed wine!

Ginsburg says she has a habit of falling asleep during these speeches because of not being 100 percent sober at the time.

Normally she has someone help try to keep her awake but this time they did not succeed. When she got home from the speech, her granddaughter called:

Bubbe, you were sleeping again!

In an interview with Bloomberg, Ginsberg talks about equal pay for women, birth control and abortion access.

If the woman has the means to go to a neighboring state, if she can buy a plane ticket or a bus ticket and afford the cost of the procedure, she’s safe. And she and her daughters will always have the choice. The people who don’t have the choice are poor women.

On her male colleagues:

I was a law school teacher. And that’s how I regard my role here with my colleagues, who haven’t had the experience of growing up female and don’t fully appreciate the arbitrary barriers that have been put in women’s way.

And how she believes a female president can counter “unconscious bias” toward women.

But I have to add a caveat. I know we have seen women heads of state in Israel, in India. And that doesn’t necessarily mean that the rest of society will progress along the same lines…Yes, there are blind spots. But in time they will go.

Ginsburg tells law students at Georgetown University about the challenges of finding a job in the legal profession as a woman in the early days of her career.

People ask me sometimes when do you think it will be enough? When will there be enough women on the court? And my answer is when there are nine. 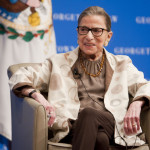 Ginsburg says that young women may have to fight to preserve abortion rights for the poor in the face of new limits. Speaking to students at Georgetown University Law Center, Ginsburg also expresses her worry about “our system being polluted” by money pouring into election campaigns—including judicial elections. She says she is hard-pressed to explain to foreign audiences why elections in the United States can be so dominated by powerful donors.

I can’t say when, but one day sensible restrictions on campaign finance will be the law of the land. There will never be a time when women of means won’t have a choice. In the worst case scenario, a woman who can afford a plane ticket or a bus ticket will have a choice. Women who won’t have that choice are poor women.

Ginsburg talks about breaking legal ground for women, her first case before the Supreme Court, and her husband’s support.

I attribute part of my success in law school to my daughter. She was 14 months old when I started. Every day at 4 o’clock, my time at law school was over, and it was children’s time. Each was a respite from the other. When my daughter went to sleep, I was happy to go back to the books.

Ginsburg establishes the ACLU Women’s Rights Project. This was the major, and sometimes the only, national legal arm of the growing movement for gender equality, recognized as the spokesperson for women’s interests in the Supreme Court, and the “premier” representative of women’s rights interests in that forum. The Project works to enforce women’s statutory rights, including the rights to equal employment opportunities guaranteed under Title VII of the Civil Rights Act6 and the Equal Pay Act. Early cases challenge the constitutionality of sex discrimination, specifically measuring the constitutionality of sex-based classifications and striking down discriminatory Social Security regulations.