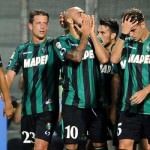 The match kicks off at Mapei Stadium and the home side get the better of the first half when in the 42nd minute Zaza Simone puts Sassoulo ahead but two minutes later Cagliari get an equaliser through Marco Sau. Striker Victor Irbabo misses the match with an injury but Diego Farias is chosen to play in his place. In the 24th minute sassoulo substitutes injured Francesco Pisano for Antonio Belzano. With eight minutes to the end of the game, Gianluca Sansone almost wins three points for Sassoulo but his shot is blocked by keeper Simone Colombi.