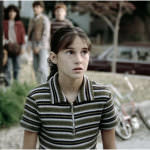 Woodley plays the 10-year-old version of the title character in the drama’s fourth season, appearing in the fourth episode. Jordan Cavanaugh is a forensic pathologist whose past holds the key to her future. Co-starring Jill Hennessy. Hennessy on the character’s fourth season, which features fewer flashbacks:

I think we’ll be dwelling a lot less on her personal trauma with her relationship with her father and mother, and getting a little more involved in, you know, some very recognizable cases.