Top representatives of the Taliban choose Mullah Akhtar Mohammad Mansour as their leader. A Taliban commander:

The shura [meeting] held outside Quetta unanimously elected Mullah Mansour as the new emir of the Taliban.

Ten people are sentenced to life in prison for their roles in the 2012 attack on Yousafzai. The assailant’s conviction and sentences follow a trial that included testimony from both sides, says the source.

A Taliban offensive in eastern Afghanistan leaves an estimated 100 civilians dead or wounded, including some women and children who were beheaded, a provincial deputy governor says. The insurgents beheaded at least 15 people, including women and children. Mohammed Ali Ahmadi:

We only have local police forces and a small number of Afghan National Army personnel fighting a huge number of well-armed Taliban in the area. 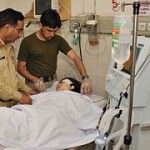 The militant group shoots Yousafzai in a school bus in Swat Valley, Pakistan. According to the police, the bus was preparing to drive students home after their morning classes, when a member of the Taliban boarded the bus in search of Yousafzai. Ehsanullah Ehsan, a spokesman for the Taliban, claims responsibility for the shooting on behalf of the Tehreek-e-Taliban Pakistan (TTP), an offshoot of the Taliban movement. The TTP is known for restricting women’s freedom and education. He defends,

She was pro-west, she was speaking against Taliban and she was calling President Obama her ideal leader. She was young but she was promoting western culture in Pashtun areas.

What's this? This is an unbiased just-the-facts news timeline ('newsline') about Taliban, created by Newslines' contributors. Help us grow it by finding and summarising news. Learn more