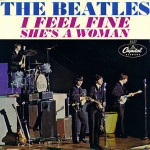 The band release I Feel Fine, the 8th British single for the band. I Feel Fine is one of the earliest examples of the use of feedback as a recording effect in popular music.  The song is the first Beatles single to be released almost concurrently in the US and the UK.  1.41 million copies are sold in the UK.

The Beatles
Add your comments below...