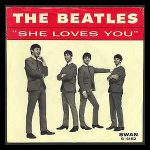 The band releases She Loves You. McCartney and Lennon were inspired to write this after a concert at the Majestic Ballroom in Newcastle when they were part of a tour with Roy Orbison and Gerry & the Pacemakers. The song is the Beatles best selling single of all time. McCartney:

We were in a van up in Newcastle-Upon-Tyne. I’d planned the song where a couple of us would sing ‘She loves you’ and the other ones would answer ‘Yeah Yeah.’ We decided that was a crummy idea but at least we then had the idea of a song called She Loves You. So we sat in the hotel bedroom for a few hours and wrote it; John and I, sitting on twin beds with guitars.