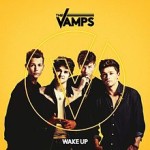 The Vamps release their single Wake Up. This track is featured on their album with the same title. The song is a collaboration between The Vamps and producer Steve Mac.

Wake Up is the first song off our second album. And, it’s the first song we ever did for the second album. That’s kinda how we got the whole sound of the next album. It’s about being there for a girl, and supporting through hard times. And, then wanting to kinda see the gratification for it, and just wanting to be appreciated. Not in a weird way. Just knowing that you are there for them, sort of thing. It kinda links in well because we haven’t released music for about a year. So, it’s kinda like Wake Up is probably a good statement for us to be back and releasing music.

The Vamps
Add your comments below...